Welcome to Kicking Back with Kick-butt!

Seventh grader Jordan Banks loves nothing more than drawing cartoons about his life. But instead of sending him to the art school of his dreams, his parents enroll him in a prestigious private school known for its academics, where Jordan is one of the few kids of color in his entire grade.

As he makes the daily trip from his Washington Heights apartment to the upscale Riverdale Academy Day School, Jordan soon finds himself torn between two worlds—and not really fitting into either one. Can Jordan learn to navigate his new school culture while keeping his neighborhood friends and staying true to himself?

Let’s talk to this marvelous author about his excellent book!

This is Jerry. Everyone say, “Hi, Jerry!”

Welcome to Kick-Butt Kidlit, Jerry! Tell us about yourself!

I was born in Harlem, grew up in near by Washington Heights and have wanted to be an artist as long as I can remember. I had trouble getting published, so I started my own publishing company  which I used to bring nearly three dozen books to life during a twenty-year span. In 2014 I illustrated The Zero Degree Zombie Zone for Scholastic. My biggest and best book, New Kid, was published in February of 2019 by HarperCollins.

AND recent winner of the Kirkus Prize! Congratulations!

Where did the idea for NEW KID come from?

It’s inspired by my life. Like me, the main character, Jordan Banks, wants to be an artist, but his mom sends his to a fancy private school instead of letting him go to the art school of his dreams. And like me, Jordan is also one of the few kids of color in his entire grade. It’s loosely based on my four years attending a private high school in the Riverdale section of New York City, as well as a lot of the experiences from my two sons going to a private school in Connecticut.

Who are some of your artistic influences?

Mainly cartoonists such as Charles Schulz, Morrie Turner and a lot of the Marvel Comics artists from the 70s and 80s. But I think the graphic novels that inspired me most when developing New Kid were Smile by Raina Telgemeier, American Born Chinese by Gene Luen Yang, and Stitches by David Small.

Why were you drawn to illustration?

Is that pun intentional? I think it is. I’ve just ALWAYS loved to draw. And the fact that I can make a living creating the books that I wished I had when I was a kid, has been an amazing experience.

Graphic novels are such a cool art form and one that many kids are interested in both reading and creating. What’s your process when you dive into a new project? How do you decide what will be written narrative versus illustrated?

Well, the writing and development of the characters is the most important. And for me, humor also plays a big role. Without that, it’s just pretty pictures. Nice to look at, but not a book that a kid bonds with to the point of the book almost becoming a friend. If you look at the Wimpy Kid books, the art is fairly simple, but it’s the writing that has made it a universal hit.

The story arc is also crucial. What happens? As well as individual character arcs. Do they learn? Do they grow? Will they be better or worse as a result of what will happen to them?

I think creating a book that is almost like a friend is the dream! Great tips!

What were three things you discovered while working on NEW KID?

Third, how important it is to have the right team around you. Everyone knows the creator’s names, but New Kid is the book that it is because of the help of my agent, my editor, my colorist, my proofreaders, my marketing team, my amazing PR people, my audio book crew . . .  And that’s before it even got to the reviewers, teachers, and librarians, and bookstore folks who have made it a success.

Any hints about your next book project?

New Kid two is called Class Act, and will follow Jordan, Drew, and Liam through their eight grade year. Or in their case “second form.” And most of the other main characters will return. I hope to be done by November of this year for a planned back to school release in 2020.

Oooh, can’t wait to check it out!

What has been the most surprising part of your publishing journey?

Finally getting the opportunity to show what I can do. I’ve always wanted to create stories showing kids of color as just regular kids. Going to school, playing video games, having normal conversations. So I’m very grateful to HarperCollins for giving me a chance to show that there is indeed a need for stories with POC that are both happy and fun.

What are you reading right now?

I literally draw all day, so there’s not a lot of time for me to read. So I rely a lot on audio books. BUT, I did snag an advanced reader copy of Guts, which is Raina’s next graphic novel which will be released in September.  So I am setting aside time for that.

I almost said “don’t give up!” But, that needs to go hand-in-hand with “constantly learning and improving.” You can’t just continue to do the same thing and expect different results. I think New Kid is the best thing I’ve ever done, but Class Act will be even better because of all the things I learned, and how I’ve grown, along the way.

So true! Thank you for a great chat, Jerry! 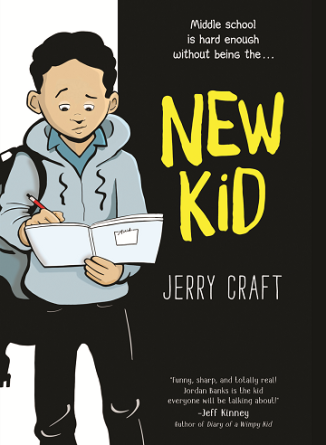 Thanks for reading and stay tuned for more fun interviews!

He is the creator of Mama’s Boyz, a comic strip that was distributed by King Features Syndicate from 1995-2013, and won five African American Literary Awards. Jerry is a co-founder of the Schomburg’s Annual Black Comic Book Festival. He was born in Harlem and grew up in nearby Washington Heights. He is a graduate of The Fieldston School and received his B.F.A. from the School of Visual Arts.

View all posts by kickbuttkidlit