Our new feature series (Kick-butt Kidlit Spotlight On:) continues this month with a focus on MYSTERY NOVELS! Specifically middle grade mystery because MG is our jam!

Let’s give a big Kick-butt welcome to our guest author for today, Henry Lien!

I think books one through four of the Harry Potter series were so beloved because they were in fact masterfully constructed mysteries mashed up with other genres. The first four books were, at heart, clockwork whodunnits dressed up in fantasy cosplay, all of it masquerading as a boarding school picaresque like Tom Brown’s Schooldays.

The effect of mashing these genres together was ingenious: Rowling made the clues that she hid in plain view harder to spot because you were distracted by all the worldbuilding, tropes, and story components from those other genres. And I believe that one mark of a good mystery is that a single plot element is doing double, triple, quadruple, even quintuple duty to distract you from its true function as a clue in plain view regarding the central mystery.

In Prisoner of Azkaban, you thought that Hermione’s constant appearances in just about every class offered at Hogwarts served to 1) demonstrate her over-committed class schedule as a running joke; 2) illustrate the ambitiousness that we’d come to love in her; 3) give her opportunity to serve as a Greek chorus by expressing doubts about theories that professors raised in class regarding Sirius Black, etc.; and 4) develop the questioning nature of her character. So you thought you fully understood the plot reasons for Hermione’s constant appearances in every class. What you didn’t realize until you got to the big surprise was that the appearances were serving a fifth purpose, which was the real purpose, which involved a stunning plot twist in service of a mystery plot, and which turned everything that preceded upside down. And the whole time this was happening, there was an equally complex set of plot layers happening around Lupin.

This was breathtakingly masterful plotting and it was possible in part because we were distracted from the clues that Rowling strewed about in plain view by the riot of fantasy elements and the boarding school story tropes. The result was one of the greatest puzzle mysteries of all time.

I was inspired to become a writer by Prisoner of Azkaban. I wanted to achieve a puzzle story as brilliantly choreographed as that book. That was a tall request of a first novel but I had the same secret weapon Rowling had: I had a mashup mystery story.

Peasprout Chen, Future Legend of Skate and Sword is an Asian-lore middle grade fantasy about a girl who comes to an academy to study an invented sport that combines figure skating with kung fu. When someone starts vandalizing the buildings on the campus, everyone suspects immigrant Peasprout, who is thrust into a mission to clear her name on top of becoming a champion at her sport. The New York Times’ description of it emphasizes the deeply mashup nature: “It’s Hermione Granger meets Crouching Tiger, Hidden Dragon meets the Ice Capades meets Mean Girls. For all its disparate ingredients, though, Peasprout Chen, Future Legend of Skate and Sword speaks in a single, strong voice, thanks to its spirited heroine.” What they left out is that it is also an action/adventure tale, a sports book, a boarding school story, a voicey faux memoir from a very unusual character POV, a sensitive LGBTQ coming of age story, and an Own Voices immigration tale. Oh, and a musical, sorta. There’s even a theme song that I wrote and Idina Menzel (“Frozen”, “Wicked”) sang the song at my book launch (check out www.henrylien.com for the video).

The effect of all these wildly diverse elements is that you’re distracted from the fact that what you’re reading is first and foremost a mystery story with clues scattered throughout that reward a second reading. To say more than that would risk spoilers. I’ll just say that almost no one has guessed the solution to the puzzle before the big reveal. I owe a lot of that to J.K. Rowling. Her work taught me that mashups allow for tricks and sleight of hand that achieve some wondrous things: true surprise and real storytelling magic. 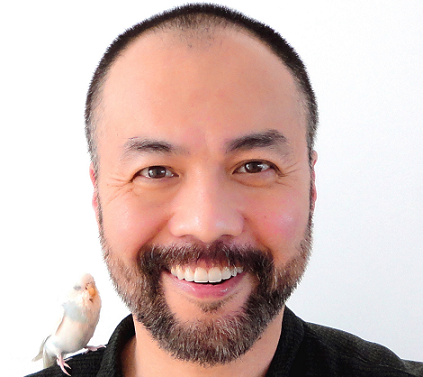 Henry Lien is a 2012 graduate of Clarion West, and his short fiction has appeared in publications like Asimov’s, earning several Nebula Award nominations. Born in Taiwan, Henry currently lives in Hollywood, California. He is the author of PEASPROUT CHEN, FUTURE LEGEND OF SKATE AND SWORD and the upcoming PEASPROUT CHEN: BATTLE OF CHAMPIONS.

Click here to win a copy of PEASPROUT CHEN, FUTURE LEGEND OF SKATE AND SWORD!

The final giveaway will be for EVERY SINGLE book featured in the Kick-butt Kidlit Spotlight On: MYSTERY blog series so make sure you check it out on every post! (New options to enter will be added with each post.) Draw closes on Friday, October 5th at the end of our series.

Tune in on Friday for a guest post from Sheila Turnage!

View all posts by kickbuttkidlit